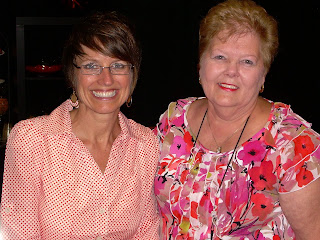 Convention in Salt Lake City was better than ever. This was my fifth year to attend. Each year has had memorable moments but this year was the best. Because of signing up a new demonstrator in April I was given the V.I.P. status at convention. This allowed me front row seating for the 2 1/2 days of classes along with priority seating for the opening and closing main stage events. With over three thousand demonstrators it was great not to have to worry about getting the " Best Seat in the House " . Further, There was a V.I.P. lounge that was open everyday f the convention where I could drop by for a lemonade and some candy, M & M peanuts, cinnamon bears or pretzels to give a sugar surge for the mid afternoon sleepy feeling. The picture shown is of the owner of Stampin'Up, Shelli Gardner who made herself available for picture taking at a private reception for the V.I.P.'s. Way to go Stampin'Up ! It was nice to treated so grandly for 4 days. Who knows what will be offered next year. But I can say this will be hard to beat.